It all started out with a homemade fish supper (aka fish and chips to anyone south of Hadrian’s wall). They maybe a gorgeous Saturday night treat, especially the way Stephen makes them  à la mode de Heston). However; early Sunday morning, feeling fragile, the lingering aroma is less than welcome. I hasten to add the fragility has nothing to do with being ‘worse for wear’.  Alas; due to the ever increasing number of freebies my doctor insists I need to function, anything brewed except tea or distilled is to be treated with caution. I have road tested this advice and I have to totally agree with it.

I digress. One tip I have seen, somewhere, suggests cooking a lemon in the microwave to make it smell fresher. Well if it will work in the microwave why not in the kitchen? Not being one to waste anything, and I mean anything, I recalled baking cakes that used boiled citrus fruit. On Christmas day I made an orange cake from one of  Tom Keridge’s books and in the dim and distant past I’m sure Nigella had a recipe for something similar. I tracked down the recipes and discovered that I did not have the ingredients for either one. Did that deter me? No siree! 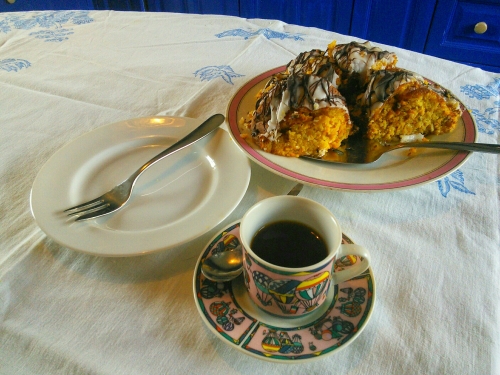 The first task was to see what was missing, what could be substituted and what did I imagine it would it taste like. One of my first problems was not enough of any one particular citrus fruit. That was easily solved, just mix ‘n’ match. Into the pan went three clementines, and two limes, that  I must confess, were past their first flush of youth. I kinda figured that after they had simmered for two hours no one would be able to guess how dejected these tangy little monsters had once been. Next task was to overcome the distinct lack of almonds, ground, flaked, whole or blanched. It looked like it was going to have to be good old mix ‘n’ match again. I had desiccated coconut and pistachio nuts to play with. Rather an unlikely combination I must admit. I wanted cake, they wanted cake it’s safe to say we wanted cake. I also figured that with that amount of whole citrus fruits in the cake whichever nuts went in they were not going to be the strongest flavour.  The, now very soft, citrus fruits were chucked into the food processor and whizzed. Next in went 150g of coconut and 100g of pistachio nuts that I’d already blitzed to a coarse powder.  I like a bit of texture! These were hotly pursued by 6 eggs, 225g sugar and 1tsp of baking powder. Just whizz together and pour into a greased and floured tin and that’s it. Simples!

Once everything is combined it should have been a simple matter of baking, cooling and eating. Once I’m off script I really go off script. For some unknown reason I decided to make this in a bundt tin. This bundt tin, with all its little nooks and crannies, for this dense mixture to become attached to. Gorilla glue couldn’t have made it stick more.

My bundt tin, not THE cake though

I wish I could say this is the cake, it’s not. The cake in question came out of this tin in at least six pieces of varying dimensions. At this point most sane people would have given up. I’m not sane and I hate waste. In the cupboard there was 200g of icing sugar and loitering on the chopping board was half of a lemon. Et voila another bonding agent. I stuck the cake together I iced the cake. There were still visible joins. Distraction tactics were needed. In the snack box there was a wee bar of dark chocolate. Hey presto a chocolate drizzle was born. What surprised us all was that through a serious of unfortunate events I had created an exceedingly good cake. For my husband’s birthday meal I’m thinking along the lines of a lime and coconut concoction, then there’s an orange, hazelnut and chocolate cake to consider. The possibilities are seemingly endless.

I’m not certain about using pistachio nuts again the colour was interesting to say the least.

The cake as it should have been, I’m giving a brief summary of the Ingredients that could be used

Prepare a 23cm spring form cake tin, grease and lightly flour it.
In a medium pan place the fruit, cover with water and simmer for two hours.
Preheat oven 190°c / 170°c fan gas mark 5
Cut fruit in half and remove any pips, do this over a bowl so you don’t lose any precious juice. Place in a food processor and pulse until smooth. Add the remaining ingredients and blitz until well mixed.
Pour into your prepared tin and bake for 40 mins. Check after 30 and cover with foil if its baking too quickly.

This really is baking alchemy. 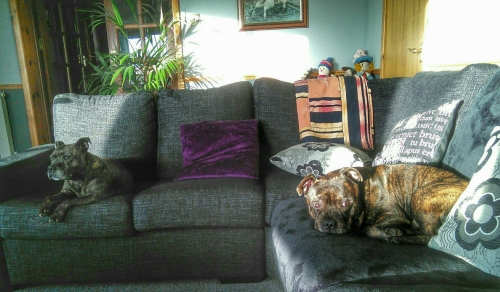 No post is complete without a picture of the pooches.

This really is a simple cake; it makes a delicious dessert served with vanilla ice cream. Last night we added a tablespoon of homemade lemon curd and it was, well for once words fail me!

One response to “Oranges and Lemons: well Clementine and Lime Cake”