In Search of the Perfect Pizza

Pizza ready to be sliced and eaten.

Every Friday was, and now is once again, Pizza Night. Almost every Friday night of the almost  ten years we lived in Bella Italia was Pizza night. Or that’s what is, rightly or wrongly, fixed into my memory. I suspect the year after Sam was born, two full months, prematurely things may have been a little less organised. Early every Friday evening, well by Italian standards, we’d pack the ‘pizza bag’;  no not for ferrying the goodies  back home, rather as my boys were only young at that time, it was full of paper, pens, whatever electronic device that was on the go- PSPs, Nintendo DS, Gameboys of various hues. (I can’t tell you how useful these little gaming machines were on that long car journey from Milan to Glasgow, via Northampton) Friday night pizzas  were one of the highlights of our week. 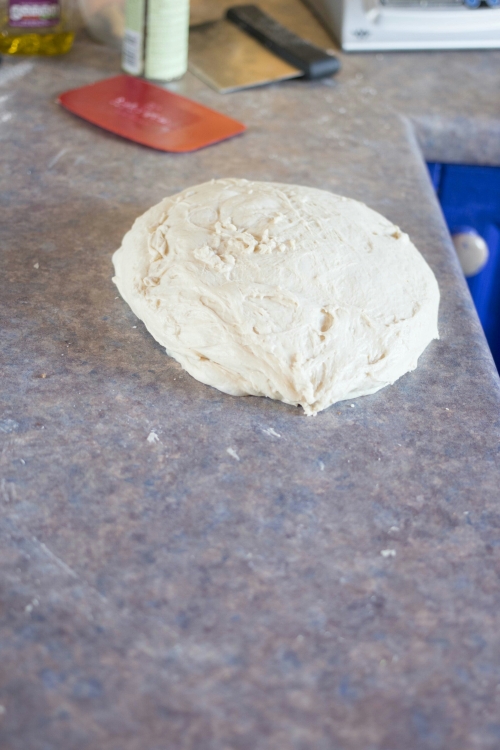 The dough after a couple of 'rests'.

All good things must come to an end as  those individuals of a pessimistic inclination will tell you. Stephen’s ten year contract with the European Schools was up, our time in Italy was quickly coming to an end. Soon a large, very large, removal truck negotiated our narrow drive. Box after box was loaded into the van. Every box was numbered and the contents listed. One of the last things to be packed was the computer, as I desperately struggled to list the contents of the final boxes as they were packed. Precious possessions to be placed in store until we could find a home of our own in Shetland. Little realising it would be a full year until outgrown toys and clothes were reunited with their owners.

A new phase on our lives had begun, it soon became evident that if we wanted an Italian style pizza we would have to make them at home. “No problem”, to quote Sam’s catch phrase. We tried all manner of things to get that thin and crispy base that still managed to be crisp, chewy and still felt like bread. We tried pre –  baking them. They were thin and certainly crispy, but they could not be described as ‘bready’ no more like loaded pitta crisps. Back to the drawing board. Luckily, I don’t know what drew me to it, I discovered the Pizza Pilgrims. I had one of those light bulb moments. Pan- fried pizzas made with a scone type base work well for a quick pizza type hit. Why not try the same method with a dough based pizza?

Ad nauseum, I went on and on about their method. Stephen was now becoming ecstatically delighted. I had  almost convinced him to build a pizza oven in the garden. Almost. I think he can’t have been listening to me when he’d agreed, then showing him some plans online must have struck an alarm bell somewhere. He did have a point; in Shetland,  where the rain is often horizontal, what chance did a pizza oven have of being used more than once a year. I think Stephen realised he’d be the one who’d be in charge of the oven. He is after all  something of a pyromaniac, more about that another day. Those who haven’t glanced at the Pizza Pilgrims book or at the brilliant pizza book ‘Franco Manca’ have a look, this revolutionary method is so so easy. You simply cook the base of the pizza in a heavy based frying pan, top it while the base cooks  then whack it under a ferociously hot grill. Simples.

Topping the base with passata.

Now once again pizza night is one of the meals we most look forward to every week. It’s a meal that has a great buzz about it. Preparations begin much earlier in the day, usually before midday. For this recipe we use  very little yeast and just let it take its time. Joseph usually makes the dough. Once I’ve worked how to upload the photos from my new Sam’s old camera it’s his hands that are dexterously folding and shaping the dough. You can make a dough and use it straight away, I have done in an emergency before and it will still be a lot better than a takeaway pizza. We just like the rituals of pizza night. 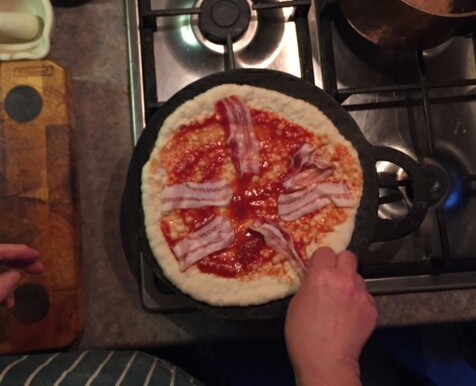 Adding pancetta. No time to hesitate

Around seven o’clock it’s all hands on deck. The surface dusted with flour. Cast iron baking stone heating up, the grill turned to its highest setting. Mozzarellas drained and halved. Pasatta opened, a small amount poured into a dish. Utensils out i.e. rolling pins, heavy oven sheet, spatula and oven gloves. Pizza boxes made, yep we’ve got the pizza bug really bad! Any other toppings. Last week’s pizzza was a sausage and rocket one; I think its my favourite. The sausage is fried, allowed to cool, casing removed and then sliced.

The assembly line then kicks into gear; Joseph deftly and alarmingly accurately rolls out perfect discs of dough. I then transfer it on to the hot pizza stone, wait for the surface to bubble, once it has I put no more than two tablespoons of passata on the base and swirl it around. Meanwhile, as the next base is being rolled out, I add the rest of the toppings to the pizza. It always amazed us how little was on a pizza in Italy, it is definitely a case of ‘less is more’ in terms of flavour. This pizza is then put under the very hot grill and is watched by who ever is going to eat it. By the time that one is cooked the next one is ready to go under the grill. I’ve tried doing it all on my own but it doesn’t work so well. The kitchen gets too hot and the dough waiting to be rolled out becomes too relaxed and stretches all over the place when you attempt to lift it onto the pizza stone. With all four of us working together it really doesn’t take long, it can get a bit frantic at times but it’s great fun. 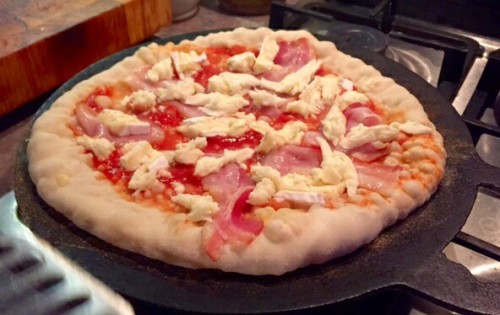 Topped with pancetta and brie ready to go under the grill.

Do give this way of cooking pizzas a go. They’re as close to an authentic Italian pizza as you can get. We could almost be sitting sitting at our favourite pizzeria in Italy, well almost.

The dough will make four 10″ pizzas.

(The pictures are of last week’s pancetta and brie pizza)

Place the flour, yeast and salt in a large bowl and combine.
Pour in the water and work together using your fingertips.
Lightly dust your working surface with flour tip your dough onto it.
Knead the dough lightly to make sure everything is all mixed together. Let it rest for a few minutes 10 – 15
Rinse your bowl and lightly oil it.
Place the dough back in your bowl cover with a damp cloth or cling film.
Leave for an other 15 mins and then carefully stretch the dough and then fold it back up. Turn the dough a quarter turn, stretch and fold again , do two more quarter turns and stretch and fold.
After the fourth turn, stretch and fold shape the dough onto a ball and put the dough back in the bowl. Leave for 15 mins and then repeat the stretching, folding and turning. Shape into a ball
Return the dough to its bowl, cover the bowl once more.
If you have used the small amount of dough leave the bowl somewhere cool for 8-12 hours
If you’ve used the larger amount of dough, leave somewhere warm for an hour.
The dough should have doubled in size
Lightly dust your work surface with flour, carefully ease your dough onto the work surface.
Divide your dough into four equal pieces, place in either one very large, lightly oiled, plastic box or two smaller ones.
Leave until doubled. Depend on the heat of your room it could be between 30-60 minutes.

Now the fun begins!
Get everything you will need ready, toppings, baking sheet, spatula.

Margherita
4 balls of pizza dough-  see above
Flour for dusting

Pre heat your grill, place the rack in its highest position
Place an oiled heavy frying pan, or cast iron baking stone/ griddle on the hob on a medium high heat.

Dust your work surface with flour and roll into a disc just smaller than your pan.
Pick your pizza base up and plop it into the hot pan. I use a small rolling pin to lift it. Spread it flat.
As soon the top begins to bubble spread 2 tbsp of passata onto the base with the back of your spoon. Put 4 or 5 basil leaves on top and distribute a quarter (60g)of the mozzarella on top.
Cook the pizza for 3-4 mins, keep checking the base, use a spatula to lift it up to see how it’s browning.
Transfer onto a baking sheet and place under the grill for 3-4 mins.
You can put the pizza in the pan under the grill, if it has a heatproof handle. Cook for 3-4 mins.
Once ready garnish with a few more, small, basil leaves and serve either sliced or whole.

Other favourite toppings (in addition to the basic passata and mozzarella)
Sausage and rocket, precook and slice the sausage . Scatter rocket over the cooked pizza.
Salami and gorganzola
Sliced chorizo and goat’s cheese
Anchovy, olive and caper
Griddled asparagus and  mozzarella, drizzled with melted butter when cooked. OMIT THE TOMATO.

Remember have a light hand with your toppings. One pack of pancetta, 120-150g, does four pizzas.