Cooking up a storm

It has taken quite awhile to get settled after our move to the mainland. New jobs, new routines and then the house sale falling through with all the financial and mental strain that involves set us in a downward spiral. Now the house is sold, Stephen is working as an EAL teacher and four days a week I teach drama in one of the largest schools in Britain. It is time to look to the future; with this in mind I have joined Townhead Slimming World group, led by the ever vivacious Clare. So let the battle commence.

Last week I’m afraid I ‘self sabotaged’, sitting in the staff base on Monday after work with coffee, my Kindle and a packet of dark chocolate digestives (not mine, I’m sorry Jacquie) If it had been milk chocolate ones I would have resisted, maybe. An hour later I had finished my book and to my shame most of  the biscuits. Feeling slightly guilty I ended the day with a couple of gins (doubles) and tonics (Slimline of course). Tomorrow is another day.  Tuesday was fine, well almost, just a couple of syn-full gin and tonics, opps. Well, Wednesday was almost as bad as Monday.  Once again I was sitting on my lonesome in the staff base waiting for Paradise Taxis, ie Stephen, to pick me up from work. On Monday it was a Parents’ evening that delayed him. On Wednesday it was a staff meeting. There I was all on my lonesome, with; coffee, a vat of, my Kindle – another book, and a tin of Danish Butter cookies this time. An hour and a half later, at least twenty biscuits later and worryingly nothing prepared for dinner, my phone rings ‘Paradise Taxis for McCormack’. On the way home ‘any ideas for dinner?’ Normally I have something prepped and waiting. Not on Wednesday though. The consuming of alcohol didn’t do me any favours. Shamefully I somehow found myself sitting in Burger 7. Still in in Destructo mode I finished the day with a couple of glasses of vin rouge, it doesn’t sound so evil in French.

I know the secret of success is in careful planning. With this in mind I went into overdrive on Sunday. I chopped enough veg to feed an army; a small, not very hungry one. Carefully coordinated, mini mountains of chunks of carrots,  chopped celery, slices of swede and pieces of parsnips ( I can’t resist a little alteration) covered the butcher’s block.

Lots of lovely ‘speed’ ie low calorie, vegetables and low fat quark which will somehow be transformed into a lasagne. I may have over estimated how much veg I’d need and I now have one very large and a smaller two portion sized lasagne sitting on the butcher’s block. I wanted to get the sauces made in order that the tomato sauce could have a long slow cook to deepen the flavours.

It’s also better if you can build the big beastie a few hours before you intend to cook the brute. Those few hours let the sheets of lasagne soften; soaking up the sauces, so you end up with an Italian style lasagne with well defined layers.

Everything you need for the spinach layers.

I’m not so keen on the over sauced sloppy ones that used to be the British norm.

That’s a few dinners sorted. Next the lunches needed  to be tackled. Almost everyone seemed to be in agreement that soups are the secret of successful Slimming. After sea through several Slimming World books and online I found I recipe that was full of mainly low calorie speed veg. After even more chopping I had everything ready for a spicy roasted root vegetable soup.

Most of the day was taken up with ‘Cooking up a Storm’. I’ve got three gorgeous rainbow trout in the freezer, which we’ll have another day, with steamed whole small potatoes, broccoli and a dill sauce. On Thursday, my day off,  the shopping will be delivered, which means my meals this week are catered for. 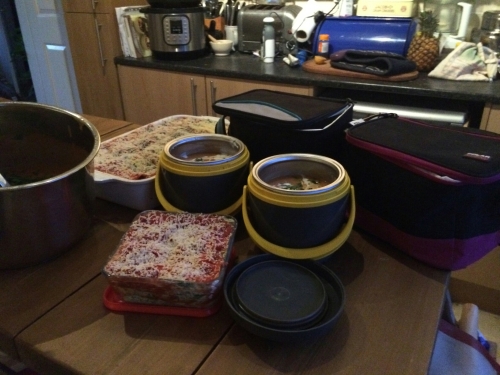 Everything seems to have shrunk now it's all cooked

This lot should keep us on the right path, lots of veg, less carbs and very little fat. The sun is definitely over the yardarm; it’s time for a
G & T.