A Weekly Box of Delights

Every Friday, while I’m still at the chalk face, a box of veritable vegetable delights is delivered to oor hoose in leafy Lanarkshire. Well compared to Shetland almost anywhere appears to be leafy. By Wednesday afternoon I’m checking my emails for the appearance of the Locavore newsletter telling me what will be in this week’s vegetable box. Then I can start thinking about meals for the coming week. 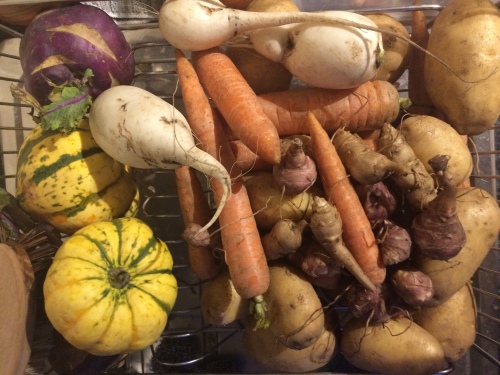 It must be nearly two months since the arrival of our first box. Joseph was at home to receive this much anticipated visitor. I was at work and it was during non-contact time when I received the call, the culinary version of “the eagle has landed”. For the next twenty minutes or so of frenzied texting, complete with images, took place between Coatbridge and Govan. I’m still like a child at Christmas, rushing in to see what edible wonders have arrived. There is always something rather wacky and weird that you are unlikely to find on most supermarket shelves; this week it was Brussel sprouts tops and kohlrabi.

We have discovered the delights of kale of various colours, squashes of all shapes and sizes. I’ve diced, steamed and roasted trays of unfamiliar veggies and I had forgotten what food should smell like. It was another supply teacher working at Govan High School that told me about Locavore ‘s veg box delivery service, thank you so much Joni. 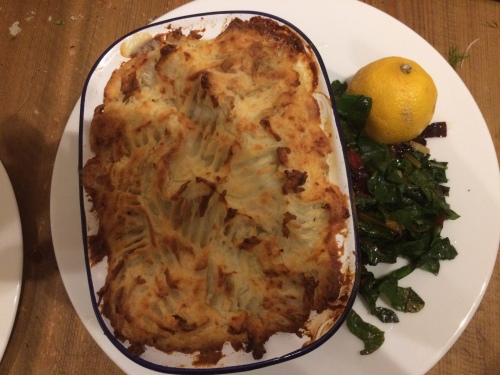 So far I haven’t had to throw one vegetable out. However; some creativity is often required to make use of every single scrap of kale and I could and probably will write about 101 ways to cook beetroot. Even though the produce is all organic we are now spending a lot less on our weekly food bill. Our meals are frequently vegetable based. Saying that we try to eat fish twice a week and meat is an occasional indulgence.

Today being Saturday we’ve only just started using up this week’s veg. On Friday night we had a takeaway, another way of supporting the local economy, well that’s my reasoning anyway. Lunchtime was our first foray into this week’s vegetable box . Saturday lunch normally involves something made with eggs a frittata or poached eggs with a sauce. 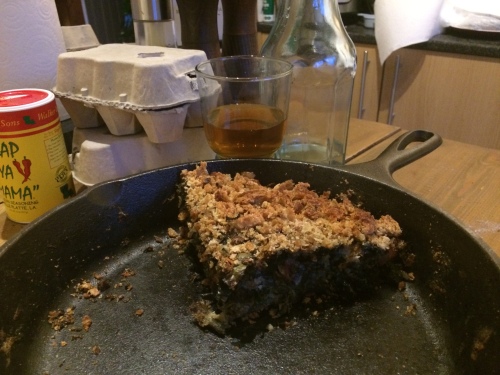 Today I built a frittata using 100% Locavore produce. I began by heating some olive oil in a skillet adding thinly sliced garlic to gently cook as the oil heats up. Next went in sliced onion, once that had started to soften I added the stems from the brussel sprout top leaves along with a couple of scrubbed carrots cut into slim crescents. I let that slowly soften before adding the brussel sprout top leaves which I had cut into fine ribbons. After they had wilted I tipped the sprouty mixture into a large bowl that contained 2 lightly beaten eggs, per serving. At this point I remembered I had the remnants of half of a salami bought on line from an online Italian deli; a goodly slice was cut into small chunks and added to the bowl. I tipped the eggs, veg and salami back into the skillet; topped with wholewheat breadcrumbs, drizzled with EVO and then slammed into a fairly hot oven. It’s a very tolerant dish I cooked it at 175C for about 30 minutes. I don’t think the thermostat on our oven is very accurate so it’s a case of waiting to see when it sets. 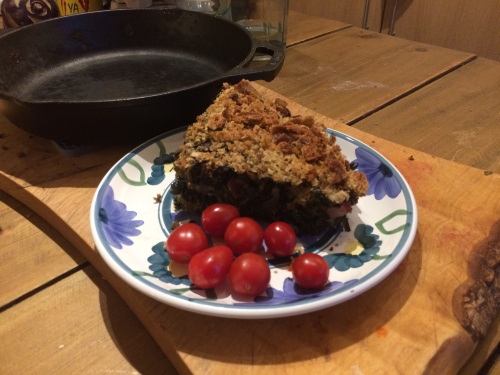 The bread we served with the mega frittata was from ‘different bried’ which comes as an add on to the veg box, the baby plum toms were in this week’s box of delights..